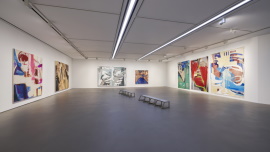 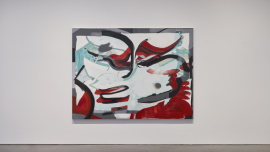 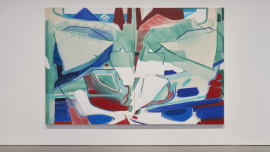 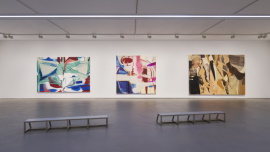 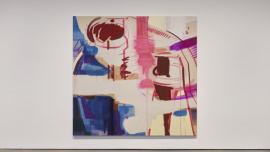 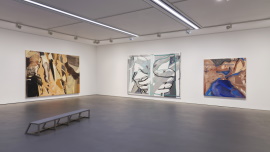 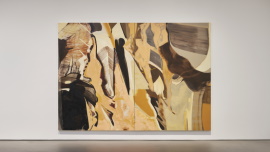 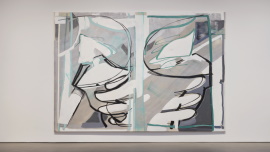 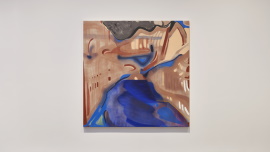 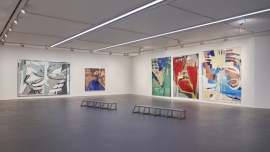 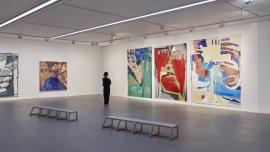 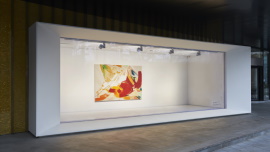 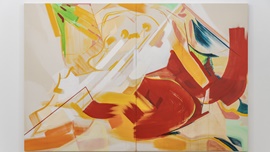 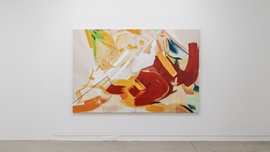 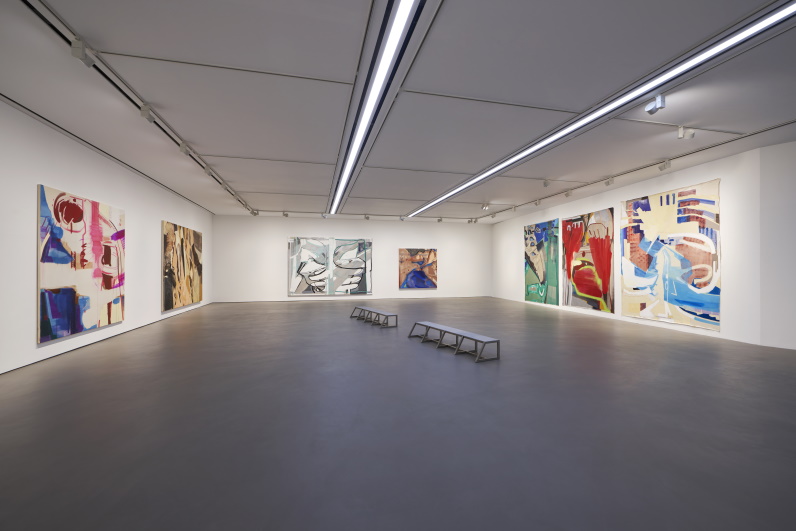 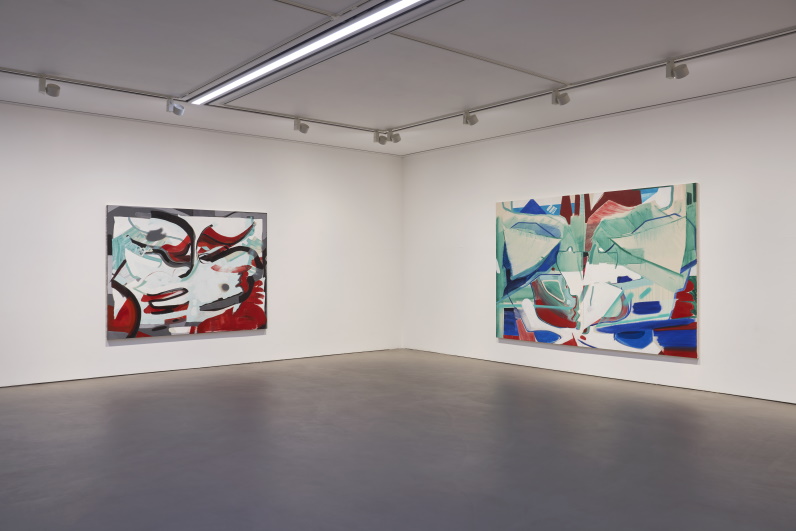 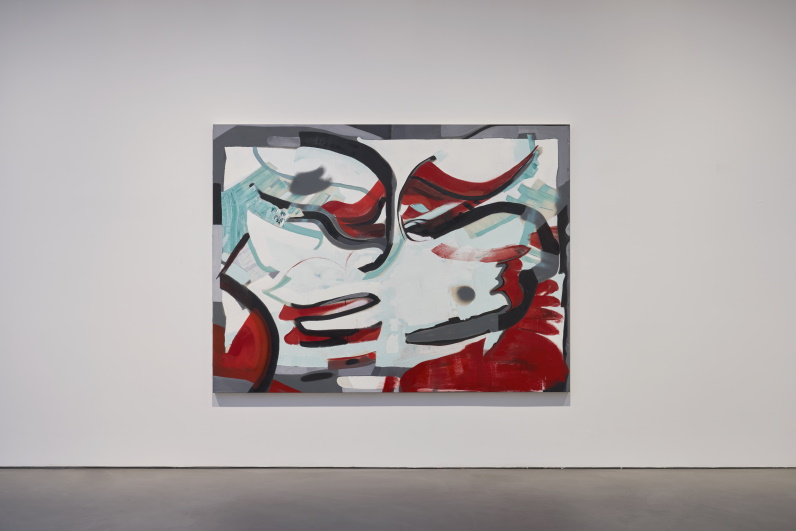 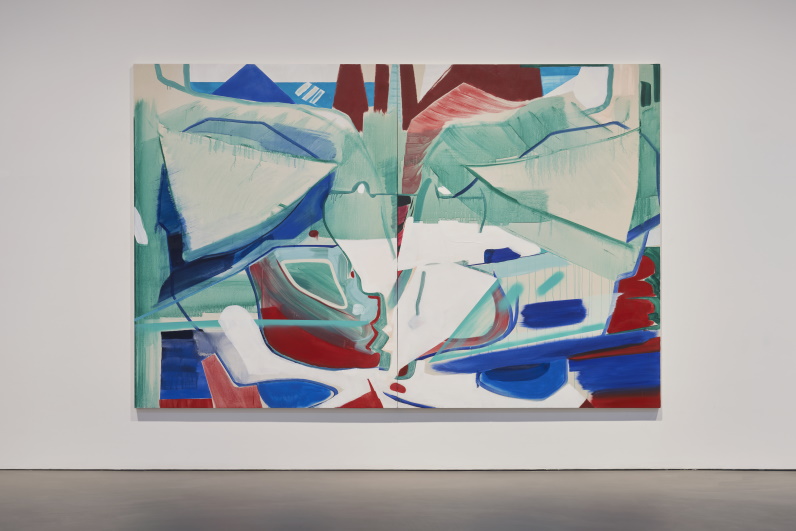 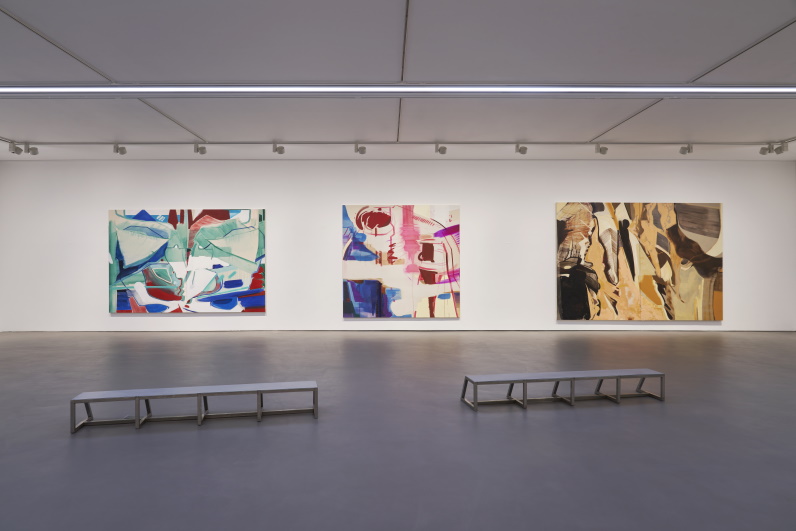 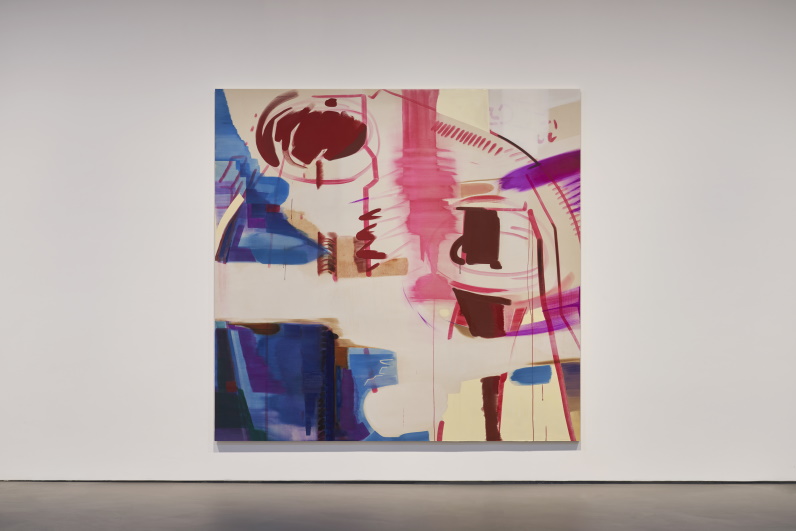 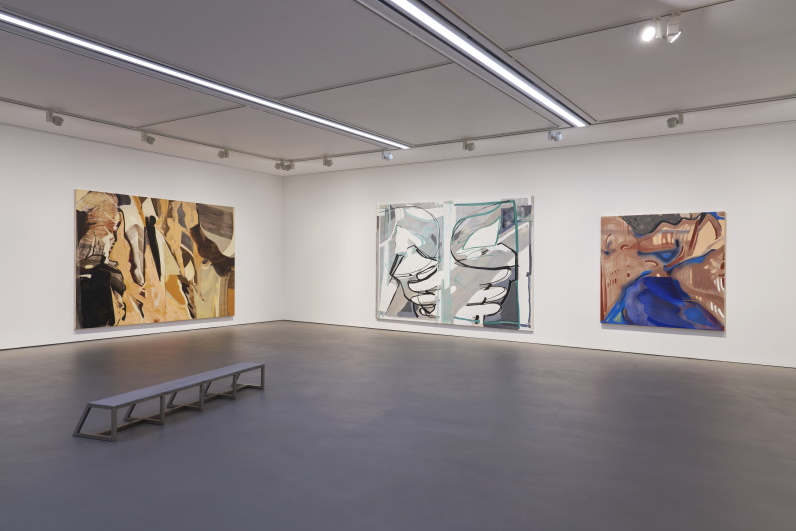 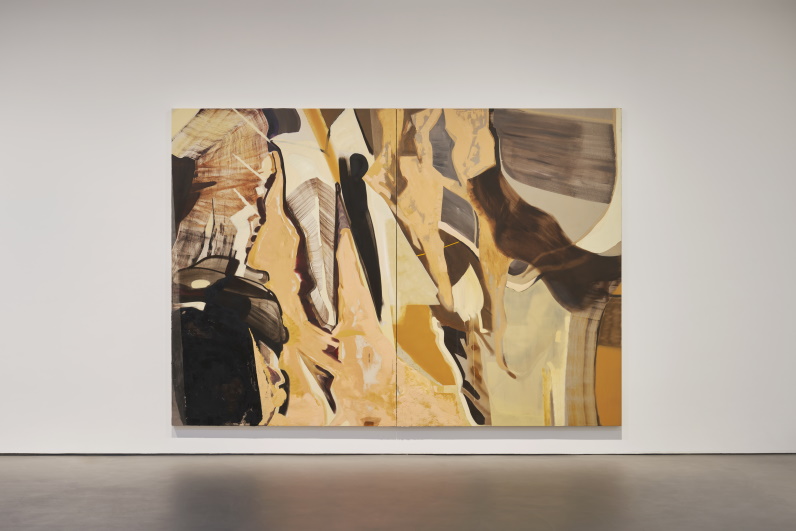 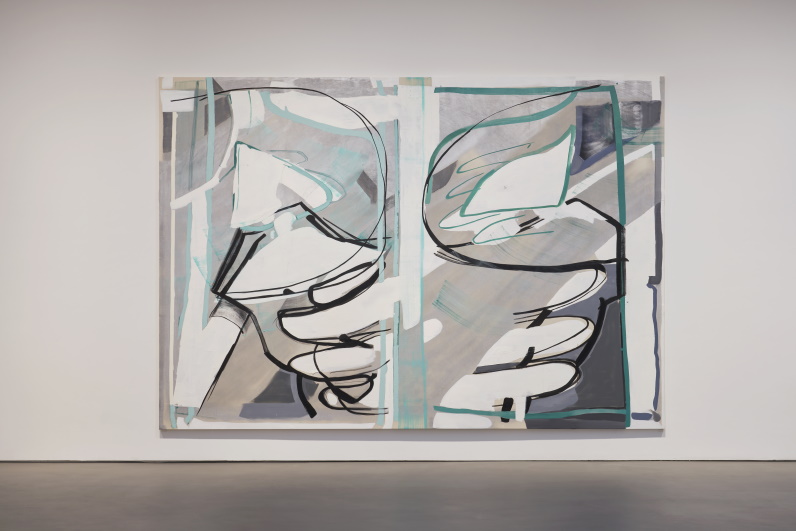 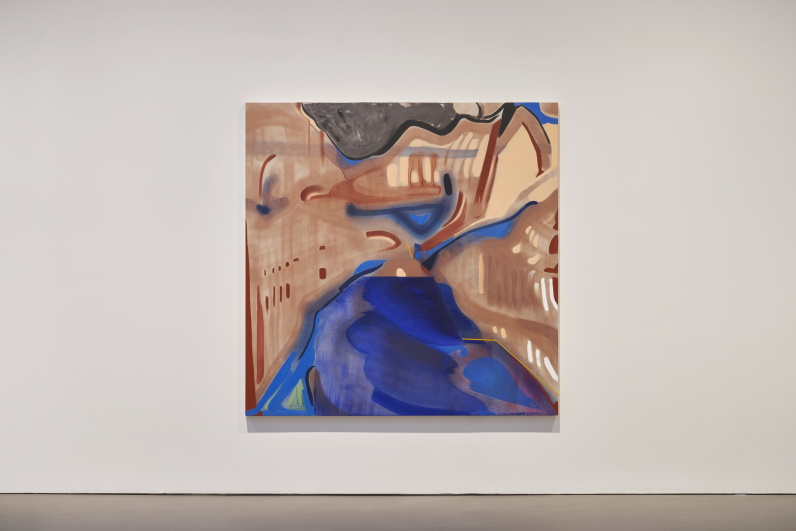 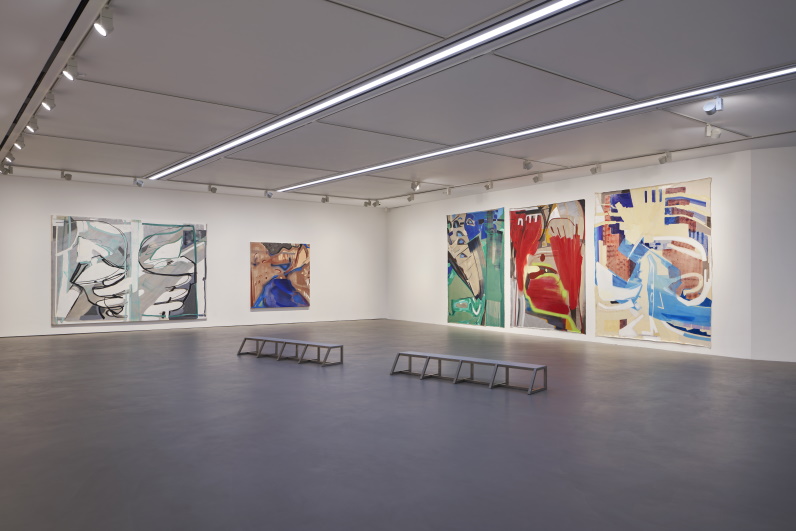 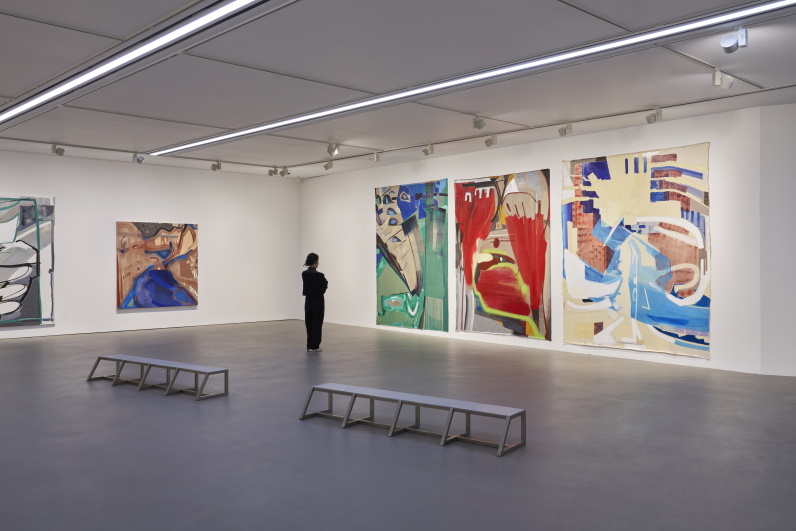 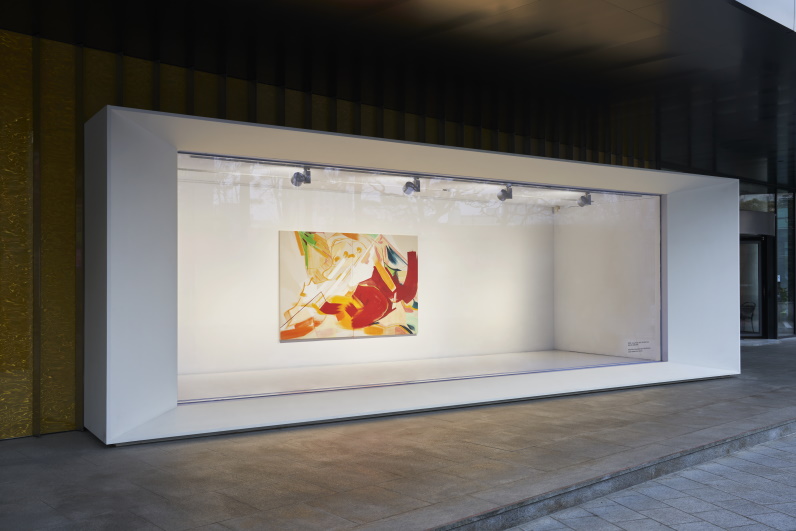 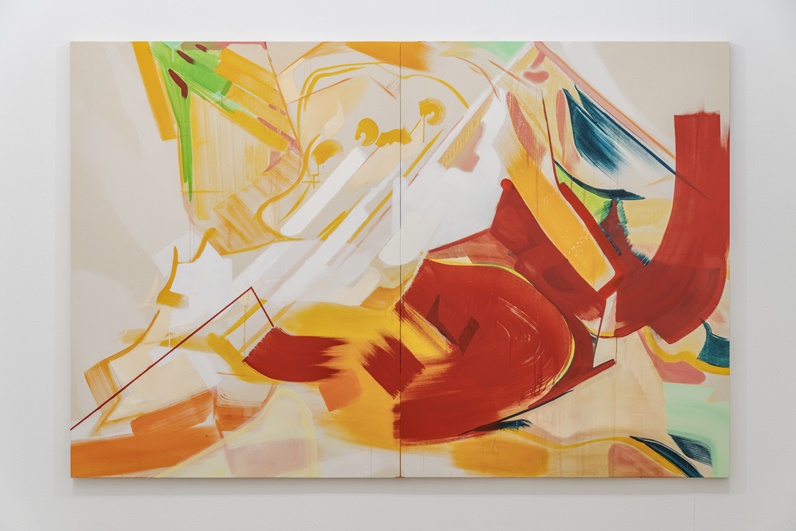 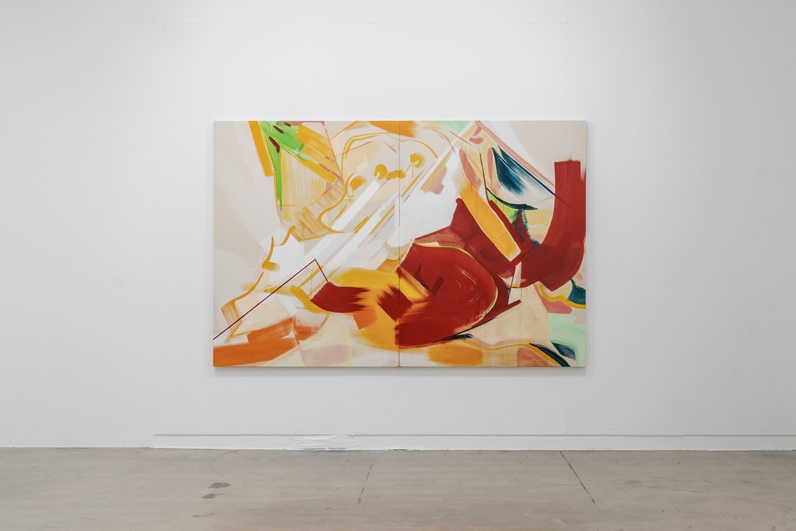 DOOSAN Gallery hosts Seeun Kim’s solo exhibition Pit Stop from Wednesday, March 2nd to Saturday, April 2nd, 2022. Having often created paintings with striking lines and colors to express the sensation of perceiving abandoned superfluous spaces within the city, Kim fills the exhibition space this time with ten new works, including three large-scale paintings. Through this exhibition, it is possible to observe how the artist takes in spaces and structures, and also the interrelation of the lines, colors, and overlapping and crisscrossing planes in these works.

A “pit stop” is a term used in car racing to refer to the space and time given to cars for mid-race maintenance. Yet, a more accurate meaning of this term is that differs from the idea of a break in that it refers to a very short pause before taking off again, a tension-filled moment of self-diagnosis. In her previous works, Kim has paid attention to leftover spaces within urban areas, especially those spaces that have been marginalized by the structure of the land, and has presented us with paintings that reconceptualize such spaces. The artist takes the shape and structure of areas that cut off from approach for lack of roads, are neighboring structures, or are concave holes and slopes, and transposes them all into forms of painting. In addition to this, the works in Pit Stop share a common feature that they showcase body parts such as ribs, collarbones, and muscles, as if one is observing the form and structure of one’s own body through color X-ray photography.

Another important element in appreciating Pit Stop is the exhibition space itself where the works are placed. Kim’s work begins from a bodily recognition of an actually existing space, and is difficult to pry apart from the surrounding space, neither in terms of the environment in which the artist paints nor in terms of the final location at which the work arrives to be shown. Displayed side by side on a slightly slanted wall, the works are placed at regular intervals so that the viewer can take them in both independently as unique pieces and also lumped together as one gigantic image.

Benches deliberately designed with the artist are placed in the exhibition space. These pieces of furniture, designed specifically for viewing, offer various eye-levels from which to view Kim’s paintings. Through the benches with lower-than-average seats, the exhibition hopes to provide an opportunity to stray from rigidly defined perspectives to experience the multifarious temporalities, spaces, structures and expressions that arise in, outside of Kim’s paintings.